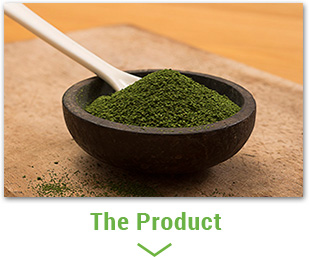 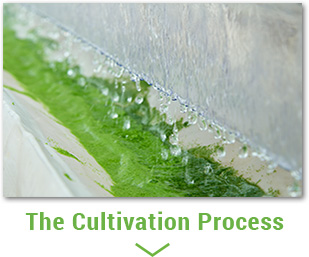 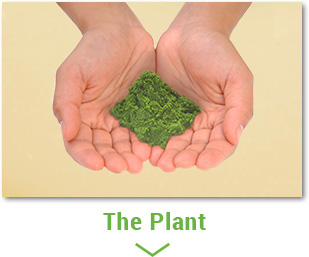 The nutritious Mankai® plant was bred from a species whose origins trace to Southeast Asia. The Mankai® plant may serve as a whole-leaf vegetable- source with extraordinary nutritional value — better than other existing products on the market. Hinoman’s exceptional cultivation system and ability to consistently deliver Mankai®  with a year-round stable composition make this non-GMO plant a promising, reliable food source for large-scale consumption. 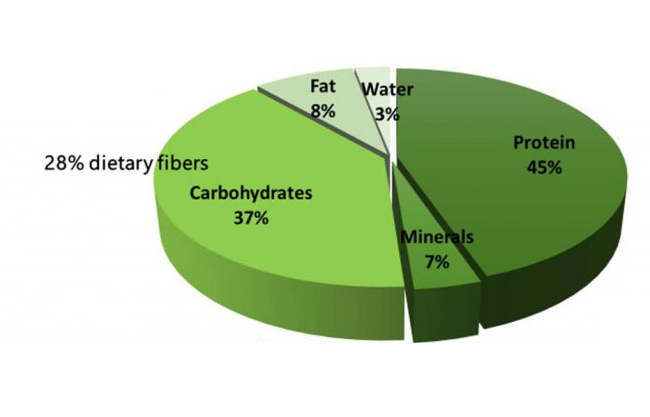 With an exceptional array of nutrients, Mankai®  is in a league of its own. The plant comprises complete protein, a mighty 45%+ on a dry-weight basis, with all 9 essential amino acids having a similar profile of protein egg. Mankai®  is tiny – at 0.5 mm – and has a neutral, mild, non-overpowering taste, unlike many other plant and animal sources of protein. Mankai®  can be used in its fresh-frozen or dry forms. 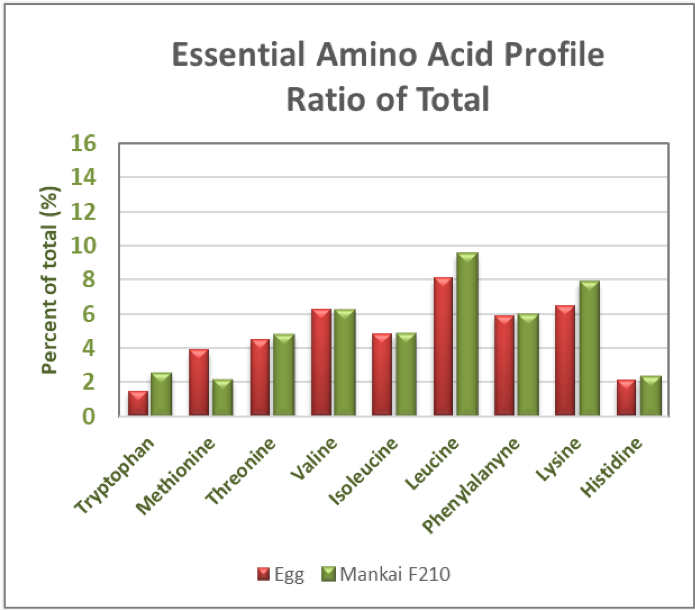 Mankai® boasts a well-rounded nutritional profile, rich in minerals, such as iron, magnesium and zinc; vitamins, such as vitamin A, E, B12 -which is rarely found in plants, and folic acid ; omega 3 fatty acids, polyphenols and phytosterols, all packed in its astonishingly compact leaves. Its protein profile, which consists of about 45% of its dry matter, is extremely close to that of an egg, the nutritional gold standard for protein. Our Mankai® product delivers the following health features:

Mankai® is rich in insoluble fibers, vitamins, minerals and polyphenols, a good-for-you food can be craveably good.

Mankai’s protein  has a high digestibility profile  as revealed by PDCAAS (protein digestibility-corrected amino acid score) test, rating it as a preferable protein source, as can be seen in the following table: 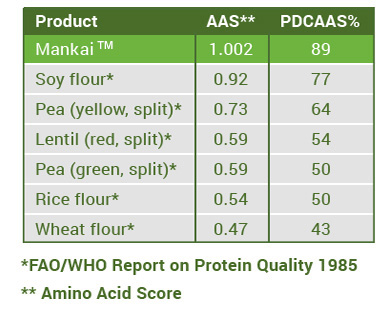 Mankai® , with its proven protein bioavailability may provide a high-quality substitute source for animal protein, as was evident by a clinical study recently published in the Clinical Nutrition Journal

Benefits that Surpass the Star Performers*

Mankai® nutritional profile eclipses other food sources including superfoods, such as soy, spirulina or kale. 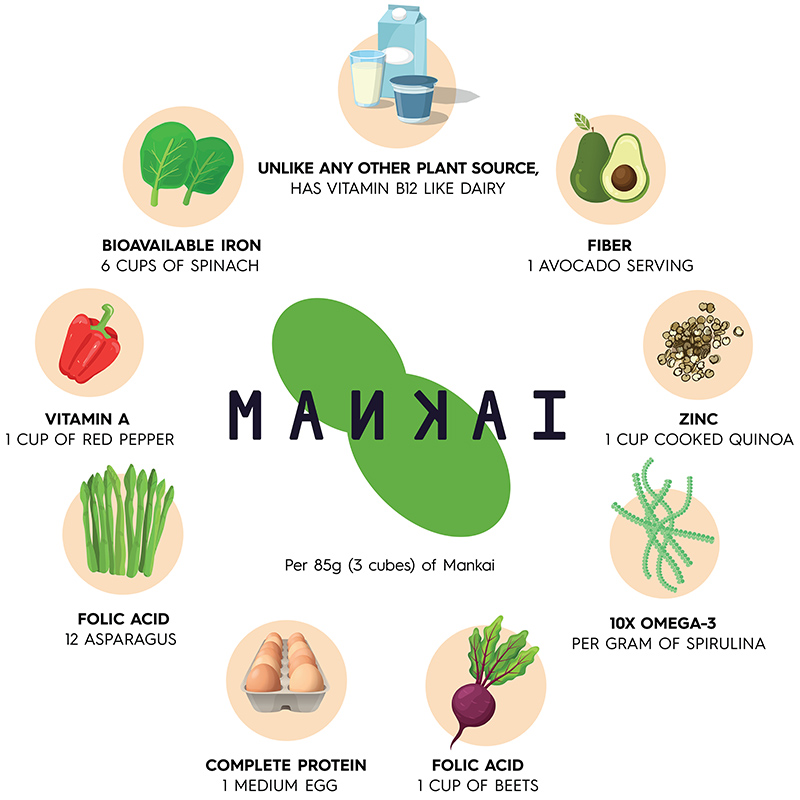 The Mankai®  plant’s dramatic benefits have sparked the curiosity of scientists worldwide who have teamed up with universities to study it. The following randomized, controlled scientific studies published in peer-reviewed journals confirm the nutritional benefits of Mankai®.

A Green-Mediterranean Diet, Supplemented with Mankai, Preserves Iron-Homeostasis in Humans and Is Efficient in Reversal of Anemia in Rats

Mankai is a rich source of iron, which is highly absorbed and bioavailable. In rats’ experiment, Mankai could treat anemia in the same rate and extend as iron supplement. In humans’ 6-month randomized controlled trial among hundreds of participants, the group which has been randomized to consume green Mediterranean diet with daily Mankai shake and less meat/poultry, did not decrease and actually improved its blood iron homeostasis and folic acid levels.

Mankai is a rich source of protein – which is bioavailable with its nine essential amino acids and is a source of B12 vitamin. In randomized controlled feeding trial in humans to explore the protein bioavailability of Mankai – it was found that all the Mankai’s essential amino acids were well absorbed and emerged in the bloodstream as did well-known protein sources such as soft cheese. The trial also suggested a potential bioavailability of Mankai’s vitamin B12.

Mankai contains bioactive B12 compounds and could serve as a vitamin B12 plant- based food source.  A deep study, performed by international research teams from prestige universities around the world, focused on the composition and availability of vitamin B12 existed in the Mankai plant, includes several aspects:

This study clearly demonstrates, again, that Mankai can serve as a natural food source of vitamin B12, especially for vegetarians and vegans

Mankai may assist to optimize your microbiome.

One of the fascinating areas of research in recent years has been the impact of the microbiome on our health and the ways in which our lifestyle habits affect the microbiome population.

A breaking through study, recently published in the prestigious Gastroenterology journal, aimed to evaluate the efficacy and safety of diet-modulated autologous fecal microbiota transplantation (aFMT) for treatment of weight regain after the weight-loss phase. The findings of this study showed that a green Mediterranean diet supplement with Mankai might preserve weight loss and glycemic control and is associated with specific microbiome signatures, where a Mankai diet better optimizes the microbiome for an aFMT procedure.

The effect of green Mediterranean diet on cardiometabolic risk; a randomised controlled trial

A large-scale clinical trial, performed by international research teams from prestige universities around the world, examined the effect of a green Mediterranean diet, rich in polyphenols, that includes regular consumption of Mankai. This study found a positive and beneficial effect on the cardiometabolic system (heart function). The findings revealed that, in addition to a high weight loss, the Green- Mediterranean diet group achieved a larger and significant decrease in waist circumference, greater and significant decrease in bad cholesterol (LDL), decrease in blood pressure, and better improvements in additional cardiometabolic indices. These findings reinforce the conclusion that routine consumption of Green-Med diet supplemented with Mankai, may amplify the beneficial cardiometabolic effects of the Mediterranean diet.

State of the Art Production: Like Manna from Water

Mankai® is grown indoor, in a closely-controlled greenhouse,  a hydroponics system that optimizes growth. It ensures that the plant is pure, clean, uncontaminated and free from pesticides. Hinoman’s proprietary cultivation algorithm and other technological elements deliver 24/7 precision aquaculture, including a remote cultivation module adhering to strict quality standards.

Hands-free full cycle of growth from basin to post harvest.

Upon harvest, 100% of the plant is used, which eliminates waste. Labor costs are also kept to a minimum with automated state-of-the-art agro-technology.

In Synergy with Nature

Mankai®  grows naturally without any use of herbicides, pesticides or fungicides.

Mankai®  propagates via a very fast and efficient vegetative growth omitting the risk of seed spoilage.  The crop is ideal for continuous cultivation with daily harvesting while utilizing the sun and carbon dioxide for year-round growth. Cultivation does not require arable land or flat terrains nor massive amounts of water; therefore,  Mankai® may promote global reach, growing in places with limited agricultural resources.

The Solution that Checks All the Boxes

With unprecedented nutritional value and freshness, Mankai®  is ideal as a food ingredient or fresh vegetable; it is rich in diverse array of vitamins and minerals. Hinoman leveraged science to optimize product taste, quality and safety. The whole plant packs full potency, bioavailable as is with no need to be processed in any way.Mankai® is highly versatile, simple to incorporate into a wide range of foods because of its small particle size and natural flavor.

With its tiny round shape, Mankai®  is ready to use in a multitude of food applications: 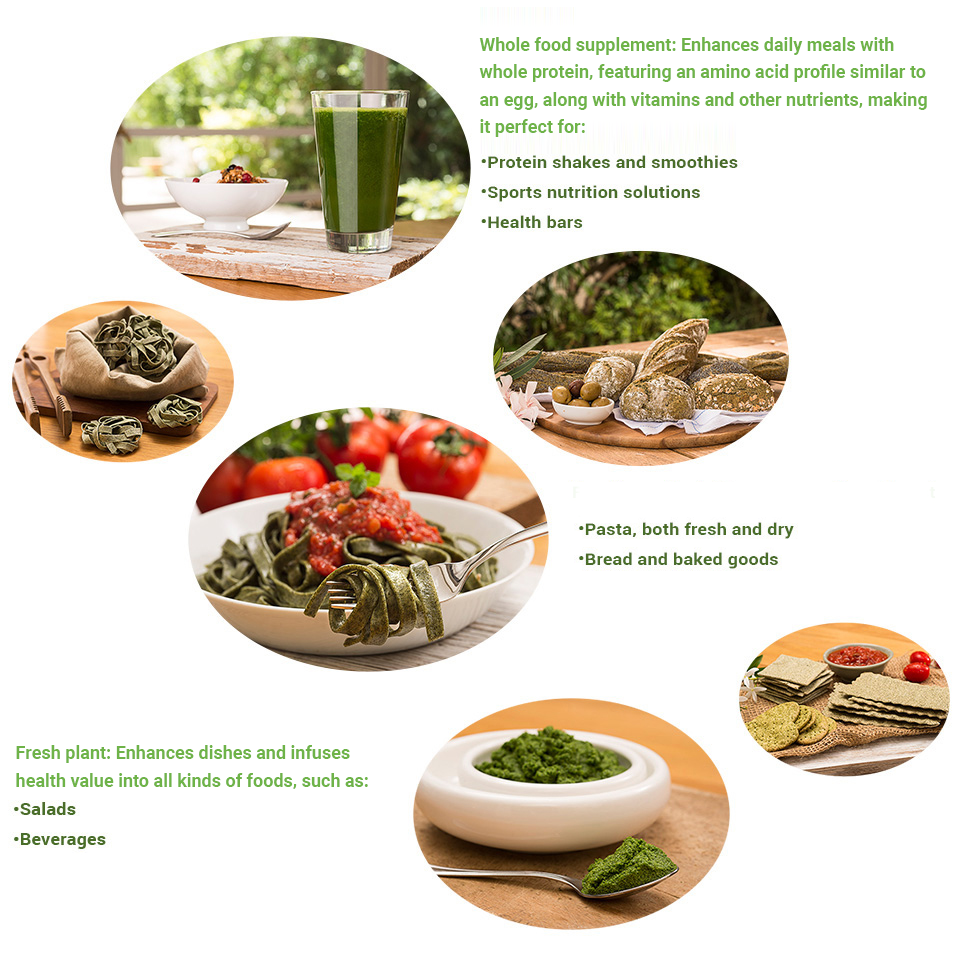 Hinoman’s value proposition lies in supplying customized, highly consistent, yet all-natural, non-GMO, booster nutrients to makers of fine foods—backed by scientific evidence. Mankai’s pleasant, natural flavor and tiny, yet manageable size, make it the ideal super-vegetable, a “drop-in” ingredient for just about any food production line. At a time when food security threaten sourcing, manufacturers can depend onMankai® for pure, wholesome, natural, consistent and sustainable nutrition with predictable yield that secures supply, composition and price stability.